At TECHNOFIST we provide academic projects based on SOLAR POWER GENERATION with latest papers implementation. Below mentioned are the list and abstracts on Android domain. For synopsis and IEEE papers please visit our head office and get registered.
OUR COMPANY VALUES : Instead of Quantity we prefer Quality, commitment and success.
OUR CUSTOMERS are delighted with the business benefits of the Technofist engineering solutions.

For more information and full ABSTRACT 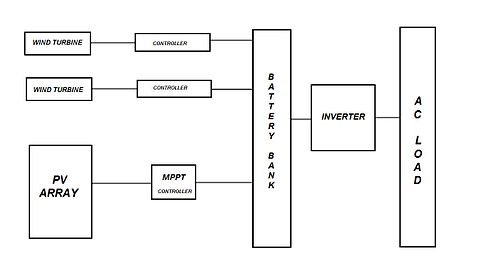 A solar cell, or photovoltaic cell (PV), is a device that converts light into electric current using the photovoltaic effect. The first solar cell was constructed by Charles Frits in the 1880s. The German industrialist Ernst Werner von Siemens was among those who recognized the importance of this discovery. In 1931, the German engineer Bruno Lange developed a photo cell using silver selenide in place of copper oxide although the prototype selenium cells converted less than 1% of incident light into electricity. Following the work of Russell Ohl in the 1940s, researchers Gerald Pearson, Calvin Fuller and Daryl Chapin created the silicon solar cell in 1954. early solar cells cost 286 USD/watt and reached efficiencies of 4.5–6%.

(HRES) are becoming popular as stand-alone power systems for providing electricity in remote areas due to advances in renewable energy technologies and subsequent rise in prices of petroleum products. A hybrid energy system, or hybrid power, usually consists of two or more renewable energy sources used together to provide increased system efficiency as well as greater balance in energy supply.

Let us consider a load of 100% power supply and there is no renewable system to fulfill this need, so two or more renewable energy system can be combined. For example, 60% from a biomass system, 20% from wind system and the remainder from fuel cells. Thus combining all these renewable energy systems may provide 100% of the power and energy requirements for the load, such as a home or business.

Most of us already know how a solar/wind/biomass power generating system works, all these generating systems have some or the other drawbacks, like Solar panels are too costly and the production cost of power by using them is generally higher than the conventional process, it is not available in the night or cloudy days. Similarly Wind turbines can’t operate in high or low wind speeds and Biomass plant collapses at low temperatures.

So if all the three are combined into one hybrid power generating system the drawbacks can be avoided partially/completely, depending on the control units. As the one or more drawbacks can be overcome by the other, as in northern hemisphere it is generally seen that in windy days the solar power is limited and vice versa and in summer and rainy season the biomass plant can operate in a full flagged so the power generation can be maintained in the above stated condition. The cost of solar panel can be subsided by using glass lenses, mirrors to heat up a fluid, that can rotate the common turbine used by wind and other sources.

Now the question arises what about the winter nights or cloudy winter days with very low wind speeds. Here comes the activity of the Hydrogen. As we know the process of electrolysis can produce hydrogen by breaking water into hydrogen and oxygen, it can be stored; hydrogen is also a good fuel and burns with oxygen to give water. Hydrogen can be used to maintain the temperature of the biomass reservoir in winter so that it can produce biogas in optimum amount for the power generation.

As stated above biogas is a good source in summer; in this period the solar energy available is also at its peak, so if the demand and supply is properly checked and calculated the excess energy can be used in the production of hydrogen and can be stored. In sunny, windy &hot day, the turbine operates with full speed as the supply is maximum, and this excess power can be consumed for the process of manufacturing hydrogen. In winter, the power consumption is also low so the supply limit is low, and obtained with lesser consumption. Driving hybrid cars will disable this outcome.

We have seen in the previous section that to generate voltage at 50 Hz we have to run the generator at some fixed rpm by some external agency. A turbine is used to rotate the generator. Turbine may be of two types, namely steam turbine and water turbine. In a thermal power station coal is burnt to produce steam which in turn, drives the steam turbine hence the generator (turbo set). The elementary features of a thermal power plant is shown. In a thermal power plant coil is burnt to produce high temperature and high pressure steam in a boiler. The steam is passed through a steam turbine to produce rotational motion. The generator, mechanically coupled to the turbine, thus rotates producing electricity. Chemical energy stored in coal after a couple of transformations produces electrical energy at the generator terminals as depicted in the figure. Thus proximity of a generating station nearer to a coal reserve and water sources will be most economical as the cost of transporting coal gets reduced. In our country coal is available in abundance and naturally thermal power plants are most popular. However, these plants pollute the atmosphere because of burning of coals. Boiler Turbine Generator Steam in 3-phase A.C Electric power Condenser Water Steam Feed out pump Chemical energy in coal Heat energy in steam Mechanical energy in turbine Electrical energy Basic components of a thermal generating unit. Coal Stringent conditions (such as use of more chimney heights along with the compulsory use of electrostatic precipitator) are put by regulatory authorities to see that the effects of pollution is minimized. A large amount of ash is produced every day in a thermal plant and effective handling of the ash adds to the running cost of the plant. Nonetheless 57% of the generation in out country is from thermal plants. The speed of alternator used in thermal plants is 3000 rpm which means 2-pole alternators are used in such plants


In a hydel power station, water head is used to drive water turbine coupled to the generator. Water head may be available in hilly region naturally in the form of water reservoir (lakes etc.) at the hill tops. The potential energy of water can be used to drive the turbo generator set installed at the base of the hills through piping called pen stock. Water head may also be created artificially by constructing dams on a suitable river. In contrast to a thermal plant, hydel power plants are eco-friendly, neat and clean as no fuel is to be burnt to produce electricity. While running cost of such plants are low, the initial installation cost is rather high compared to a thermal plants due to massive civil construction necessary. Also sites to be selected for such plants depend upon natural availability of water reservoirs at hill tops or availability of suitable Version 2 EE IIT, Kharagpur rivers for constructing dams. Water turbines generally operate at low rpm, so number of poles of the alternator are high. For example a 20-pole alternator the rpm of the turbine is only 300 rpm. Discharge of water in down stream Generator Up stream water level 3-phase A.C Electric power Water head H Dam Water Turbine Potential energy of water Kinetic energy Electrical energy Basic components of a hydel generating unit.

sources of energy The bulk generation of power by thermal, hydel and nuclear plants are called conventional methods for producing electricity. Search for newer avenues for harnessing eco friendly electrical power has already begun to meet the future challenges of meeting growing power demand. Compared to conventional methods, the capacity in terms of MW of each nonconventional plant is rather low, but most of them are eco friendly and self sustainable. Wind power, solar power, MHD generation, fuel cell and power from tidal waves are some of the promising alternative sources of energy for the future.

The huge amount of power generated in a power station (hundreds of MW) is to be transported over a long distance (hundreds of kilometers) to load centers to cater power to consumers with the help of transmission line and transmission towers as shown in figure To give an idea, let us consider a generating station producing 120 MW power and we want to transmit it over a large distance.